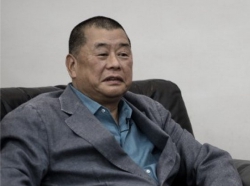 As one of Hong Kong's most outspoken democracy advocates, media tycoon Jimmy Lai has been on the receiving end of everything from rotten animal entrails to Molotov cocktails in the past 12 months, AFP reports.

When the city erupted into mass protests last year against a Beijing-backed plan for its next leader, father-of-six Lai, 66, became a frequent fixture at the major rally site and a regular target for pro-government supporters.

The contentious bill would have allowed the public to vote for Hong Kong's leader for the first time, but kept to a Beijing ruling that all candidates must be vetted by a loyalist committee -- derided as "fake democracy" by Lai and opposition campaigners.

After months of political wrangling the proposal was finally voted down on Thursday by lawmakers in an unprecedented rebuke by the semi-autonomous city towards Beijing.

But with the defeat of the bill, Hong Kong's leader will continue to be chosen by a pro-Beijing committee and Lai is preparing for the next phase of battle.

"It's very encouraging for Hong Kong (that the bill was rejected)," he tells AFP.

"What's going to happen in the end? We really don't know. But once we give up, we are giving up fighting for our democracy and freedom. We are kind of giving up our dignity as humans," he says.

Founder of the strident anti-government newspaper Apple Daily and the main shareholder -- along with his wife Teresa -- in its publisher Next Media, Lai draws both admiration and bile.

His house and office were firebombed in January and putrid animal organs thrown at him during the demonstrations.

"You just get used to it. I've never had a bodyguard," says a matter-of-fact Lai.

"If I go to the MTR (Hong Kong's subway) there's always someone shouting at me, pointing at me, calling me 'traitor'. I don't care.

"I just do what I think is right."

Beijing has shown no sign of compromise on future reform for Hong Kong and there are fears of a backlash in the wake of the defeat of the bill, but Lai says China must change.

"China being the number two strongest country in the world and having a dictator like (President) Xi Jinping on top of it is making a lot of other countries restless," says Lai.

"Also, domestically, a lot of people think Xi Jinping is becoming Mao Zedong," he says, referring to the founding father of communist China.

"By giving Hong Kong democracy, people would look at them as enlightened leaders.

"(It) is actually a very cheap price for good PR."

Hong Kong was a British colony until it was handed back to China in 1997 and is ruled under a "one country, two systems" deal that allows it far greater civil liberties than those enjoyed on the Chinese mainland, including freedom of speech and the right to protest.

However a number of incidents in recent months have sounded alarm bells over threats to press freedoms, from censorship and the strategic withdrawal of advertising to interference from officials and physical assaults on journalists.

"It's bad -- a lot of the media are leaning to their (Beijing's) side," says Lai, but he believes technology will make control more difficult.

"Nobody will have control of the media in the future because user-generated content is going to become the major content."

More oppression in Hong Kong would make the city increasingly ungovernable, says Lai, who also bats away concerns over the fragmentation of the democracy movement as new smaller groups emerge.

"What we have to worry about is whether some of those organisations are set up by Beijing, pretending they are part of us, but trying to destroy unity," he says.

Relaxing back into an armchair at Next Media headquarters, Lai casts himself as a rebel optimist.

At 12 years old he was smuggled in to Hong Kong by his family in a boat from the southern Chinese city of Guangzhou.

He began work in a garment factory, becoming a knitter and teaching himself English before setting up a clothing firm in his late 20s.

It was the bloody crackdown in Beijing's Tiananmen Square in 1989 that hardened his politics and he set up Next Media the following year.

"As long as I'm alive, I don't think Next Media will change. I don't want my kids, my grandchildren, to say my father, my grandfather was very rich but he was an asshole," says Lai.

He converted to Catholicism in 1997, encouraged by his wife, and says his faith makes him "worry less".

The daily crises of his early life as an entrepreneur have also made him an optimist, he says.

But while Lai may be phlegmatic, he does not want his children to follow his path -- they will not inherit his media empire.

"I don't want them to go through what I went through," says Lai.

"I'm from the street -- they're from a glasshouse. It's a very different life."